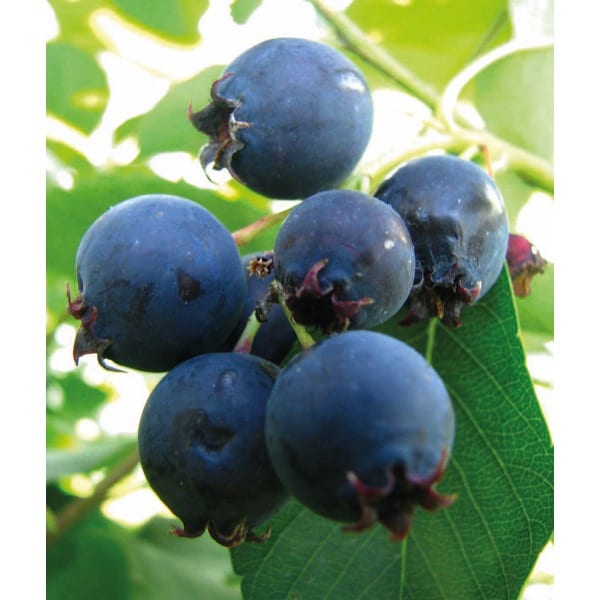 The Thiessen saskatoon (Amelanchier alnifolia ‘Thiessen’) cultivar bears fruit abundantly on one and two-year-old stems, three to four years after planting. Its fruit can be eaten raw, made into preserves, used for baking, and when dried resemble raisins. This shrub is very decorative in autumn, when its leaves turn a beautiful orange red. A fully grown shrub can be up to 5 m tall.

General description: The Thiessen saskatoon, also commonly called the serviceberry, was created in North Saskatchewan River, in the Saskatchewan province of Canada. It was introduced in 1976 and is now the second most popular saskatoon cultivar in Canada. Thiessen sets flowers a few days earlier than other saskatoons, so its flowers may be more vulnerable to damage from late spring frosts. It’s is a self-pollinating shrub recommended for amateur cultivation.

Flowers: Come spring, Thiessen’s inflorescences develop earlier than its leaves and withstand frosts of down to -7°C. Its flowers bloom abundantly and are very decorative, white with a pinkish tint, and grow gathered in pendulous inflorescences. This saskatoon blooms earlier than other cultivars, so its flowers may be more susceptible to damage in case of harsh late spring frosts.

Blooming: Thiessen flowers in early spring, beginning in the second half of April, attaining to full bloom at the end April or at the beginning of May. It produces bisexual flowers, that is with both female (pistils) and male (stamens with anthers) reproductive parts. This shrub attracts bees, butterflies and birds.

Leaves: Saskatoon are deciduous, dropping leaves for the winter and growing new foliage in spring. Fresh leaves have entire (smooth) margins, and older leaves develop very delicately serrated edges, usually in the top part of the leaf. They grow to around 2-5 cm long, and 2-4 cm wide.

Fruit: Thiessen bears medium to large sized, spherical fruit (pomes) up to 17 mm in diameter. They are bluish black, develop a lighter-coloured waxy bloom, and grow gathered in dense clusters of 6-12. Their flesh is soft and juicy, resembling blueberries in taste but with a delicate almond aftertaste. It’s worth planting two shrubs in each other vicinity so they pollinate each other, as this has a beneficial effect on fruit yield.

Cultivation requirements: This saskatoon prefers sunny locations. Adequate sunlight guarantees a high yield and good quality fruit, because fruit that ripen in the sun have a better taste. Thiessen grows and fruits well in both fertile and poor soils. The soil should be slightly acidic to slightly alkaline (pH 6.2 to pH 7.5). It’s an undemanding shrub, easy to cultivate, although it is sensitive to salinity and lack of soil moisture in the first few years after planting.

Care: Judy does not require special care, however it has to be watered regularly, especially in the summer. On hot days, watering early in the morning or in the evening is recommended, whilst taking care to avoid wetting leaves as this may cause burn marks.

Pruning: Seedlings obtained from root cuttings should be trimmed by 1/3 of their length right after planting to maintain balance between the plant’s root system and the shoots above ground. Such seedlings will grow very little in the first year, but they will develop their root system, and in the following years they’ll produce lots of new shoots with many leaves. The first pruning cut should be done after 5 years from planting (in this period the saskatoons reach full fruiting). Old, damaged, broken, and excessively thick stems should be removed, and this procedure repeated annually to maintain a balance between the growth of the shrub and proper fruiting.

Overwintering: Thiessen is resistant to frost and withstands temperature drops of down to -30°C. It’s recommended to cover young seedlings for the winter, for example by piling a mound of bark over the plant.

0/5
No reviews for the product

Be the first to write your review !
Write a Review 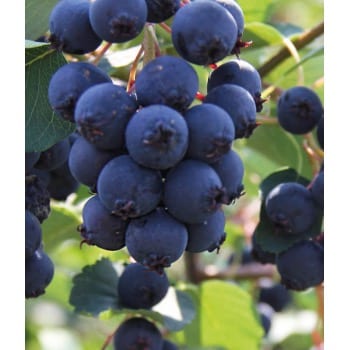 The Smokey saskatoon (Amelanchier alnifolia ’Smokey’) is the sweetest and most prolific cultivar. It grows up to 4 m in height. Its fruit have delicate, sweet and juicy flesh, similar to that of blueberries. Smokey is the sweetest cultivar created so far. 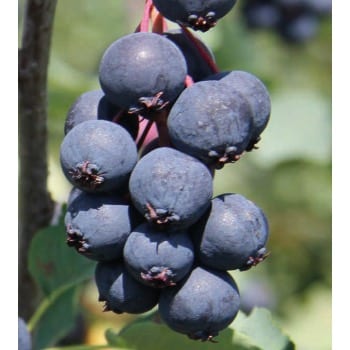 The Northline saskatoon cultivar bears big fruit abundantly. Their taste is excellent - intense and sweet. It’s a vigorously growing shrub that grows to 4 m high. It’s one of the most frequently cultivated varieties in Canada and bears fruit in the third year after planting. Northline is very ... 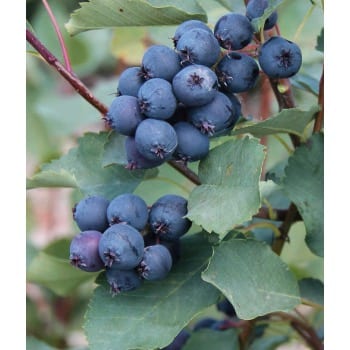 The Martin saskatoon (serviceberry) variety is very similar to Thiessen. It bears large fruit that ripen evenly. It grows up to 4 m high. This variety was created by D. Martin, to whom it owes its name. Martin is very popular with Canadian growers. It’s recommended for commercial and amateur ... 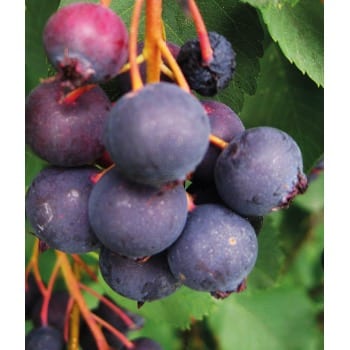 Honeywood (Amelanchier alnifolia ‘Honeywood’) is a shrub that grows up to 5 m tall. It’s characterised by seasonal foliage, decorative flowering and leaves that change colour in autumn, which looks charming. It’s seldom attacked by pests and is fully frost hardy. The fruit are similar in ...